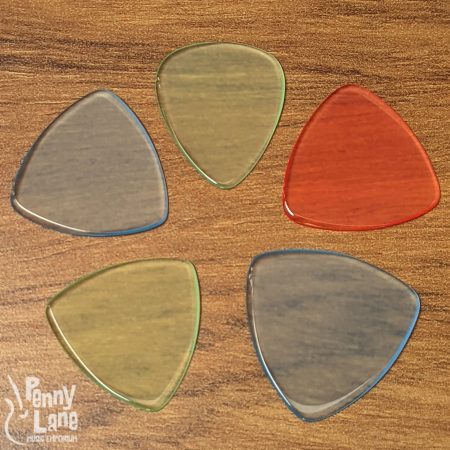 The quest for ultimate tone is nothing new. Acoustic musicians have experimented and chased that ghost for as long as plectrums have been needed. For the last 100 years, the pinnacle of tone has been crafted from backs of the endangered Hawksbill sea turtle. Top stringed instrument players have preferred the tonal qualities of tortoise shell (as it’s commonly known), but these types of plectrums are no longer manufactured due to the endangerment of the species.

The quest for the tone has finally ended! It’s time to reveal your instrument’s true tone. ToneSlabs has unlocked the tonal secrets of that natural material. Their combination of hardness, rigidity, density, design and top shelf bevel techniques exceeds the tonal quality of tortoise shell. Your slab is the key to volume, clarity, and note separation. That’s what all discerning musician’s strive for, isn’t it?

ToneSlabs take the power of that tonal essence and all that it represents very seriously. Co-Founders David Welch and Multi Grammy nominated artist Frank Solivan have spent decades performing, searching, tinkering, and experimenting to find a pick that will produce the perfect tone. Ultimately, that time and effort has led them to design and refine their picks for optimum tone. Their attention to detail combined with material, make ToneSlabs the premier pick across the plectrum landscape.

There are no reviews yet.

Be the first to review “TONESLABS INSTRUMENT PICKS” Cancel reply