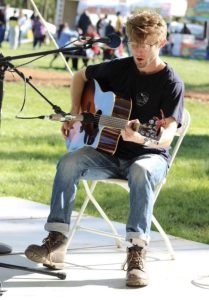 Alex Winshel is a 25 year-old musician originally from Philly. Influenced by blues, bluegrass, rock and funk – he has gigged around the country, including the NYC area, New England, Colorado, and Philly. He has performed at venues on the east coast such as the Stone Pony and the Stanhope House, and has opened for acts such as Johnny Neel (Allman Bros). He was the recipient of the 2019 New Jersey Folk Festival singer-songwriter award.